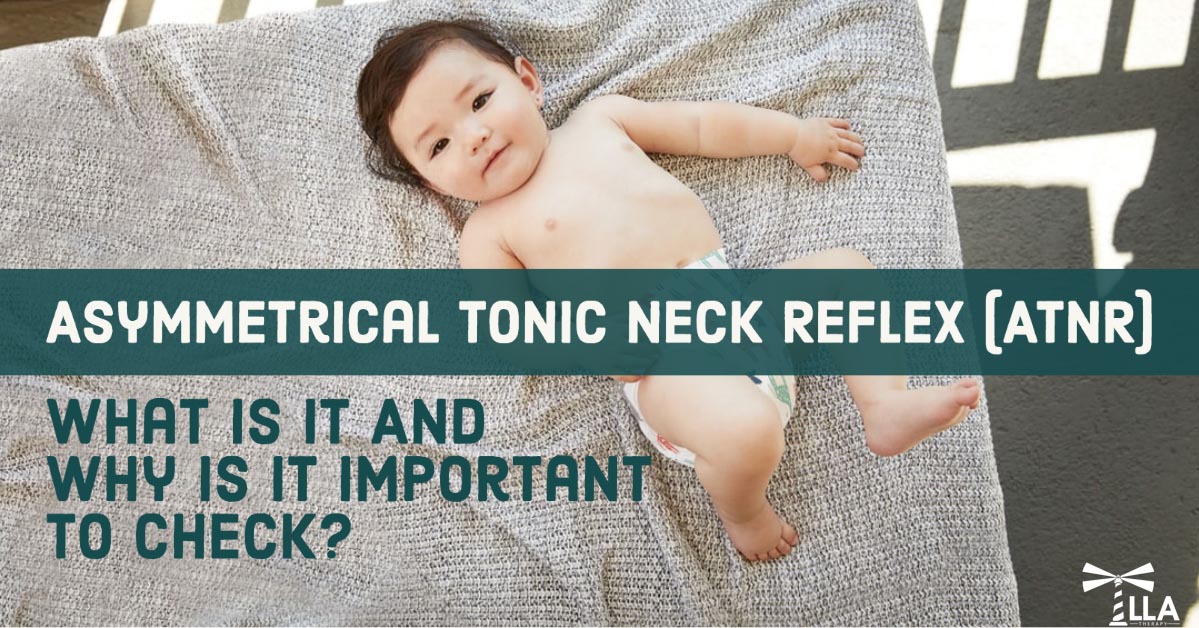 We are all born with a set of primitive reflexes that assist with exiting the birth canal during birth and will typically integrate into our system and essentially disappear during the first several months of age. Sometimes these reflexes don’t always integrate and go away on their own, in which case, there are interventions and exercises that can help integrate them and reduce their effects. Asymmetrical Tonic Neck Reflex (ATNR) is one of those primitive reflexes that we check often within physical and occupational therapy. So, what is this ATNR that I speak of, I will tell you. ATNR is also sometimes referred to as the “fencing reflex” or “superhero reflex” due the positioning of the infant’s head, arms, and legs. When the head is turned to one side (looking over one shoulder) the arm and the leg on the same side with extend and straighten while the opposite arm and leg will flex and fold. ATNR will typically integrate into the infant’s system around 3-9 months of age, however, there are occurrences of this reflex not integrating. We refer to this as a retained ATNR.

If ATNR does not integrate into an individual’s system, there are several aspects of life that can be affected because every time the head turns there is influence on limb movement. A retained ATNR can have negative impacts on the following areas: eye-hand coordination, bilateral coordination, crossing the midline, and visual tracking. There are some reports out there that say or suggest that retained ATNR can lead to cognitive, attention, and sensory processing deficits, however, most medical research does not support that, but rather, it can appear to impact those areas as a secondary effect to poor visual track and coordination.

Think about a child in class. They have to sit at their desk and copy a sentence from the board, they are holding their pencil in their right hand trying to write on the paper on the desk top, then look up at the board to their right, if this child has a retained ATNR, then that hand trying to write is going to involuntarily want to extend out and away from the paper, making it hard to write legibility.

Now think about another child with a retained ATNR attempting to do their homework at home and read the instructions on the top of that paper. Individual’s with a retained ATNR have difficulty with visual tracking, meaning moving their eyes from side to side through their entire visual field, so how easily is it going to be for this child to read the instructions moving their eyes from one side to the other side without loosing their spot?

Okay, let’s look at a 3rd child, this time they are learning to crawl, and they are doing good for a few steps, then they turn their head to the left to look at someone cheering for them and their right arm buckles and bends and they stumble, if this child has a retained ATRN, they can’t help that limb movement.

Let’s look at an older child, learning to drive (I know, such a scary thought, am I right?) and they have a mildly retained ATNR that hasn’t had a significant impact on their life, they have made it to 16 without really noticing anything. Oh, but now, they are looking left, and right, and left again to make sure there is no traffic before they pull out of the drive way. They start to pull out, turning that wheel, they look left one more time and jerk the wheel because that left arm wants to extend and the right arm wants to bend and they can’t keep their hands on 10:00 and 2:00!!!!!!!.

Anyways, I will get off my long winded (hey, I’m Italian – it’s like another reflex) soapbox, you get the picture, there are many things that can be difficult if a child has a retained ATRN.

So you think you, your child, or that teenager that cut you off in traffic yesterday might have a retained ATNR, so what do you do now? I would start with seeking assistance from one of LLA’s wonderful Physical or Occupational Therapist depending on what area or areas of functioning you think may be impacted. Physical and Occupational Therapists will often test for signs of retention of several primitive reflexes, ATNR being a big one. There are a couple different ways of testing for signs of retention, as well as several exercises to help integrate the reflex. Having the child repetitively reach across their midline to reach for objects is one way to assist with increasing midline crossing. There are visual exercises to do that can help visual tracking and scanning. There are so many creative ways to try and integrate ATNR that are fun and functional.

Thank you for visiting the LLA Therapy Blog, we hope you found this informative and enjoyable.