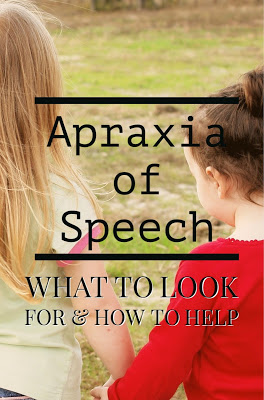 Childhood Apraxia of Speech (also known as verbal apraxia or dyspraxia) is a disorder of a child’s verbal coordination skills for speech.  Speech is a very complex motor activity for any child to develop, but when CAS is involved, it may be very difficult for a child to control the mouth movements for precise sound production and sound sequencing.

What are the signs of apraxia in a young child?

·         shows that he/she wants to communicate but either isn’t or is struggling when trying.

·         may also show some difficulty with non-speech oral tasks, such as licking and chewing.  (This may be due to an accompanying oral apraxia).

When should I be concerned as a parent?

Parents have excellent intuition when it comes to their children.  Recognizing that your child wants to communicate, but can’t or won’t, is a good sign that help may be needed.  A child’s (or parent’s!) frustration over communication difficulties is enough to warrant a speech screening or evaluation.  A speech-language pathologist can help sort out a child’s abilities and weaknesses.  If it is determined that there is a need for therapy, the therapist will create a treatment plan and provide the family with home programming suggestions.
We may determine that the child does not have apraxia, but is developing speech but with a delay.  Therapy can provide such a child with the ability to catch up to his/her peers.  In some cases, particularly when a child is not speaking at all or very minimally, a therapist may need to defer an apraxia diagnosis until the child has been talking for a while.   Therapy in these situations will first target helping a child to just begin using sounds, syllables and words.

What can I do to help my child who has speech difficulties (especially apraxia)?

The number one recommendation is to let what your child is saying (or trying to communicate, even via gestures and pointing) be more important than how he/she is saying it.  Most often, a parent is a child’s safe harbor, knowing what he/she is trying to communicate when no one else does.  If your child just grunts and points, act as if he/she actually said the word, model the word, and acknowledge what your child wants.

Do not pressure your child to speak.  If a child has apraxia, it may be extremely difficult for him/her to say something when asked to do so (even if the child often says the same thing spontaneously).  One of the difficulties of apraxia is that sometimes the child can say something without thinking about it, but when asked to speak, cannot get it out.  This leads to frustration on the part of both the child (who wants to comply) and the parent (who thinks the child is being stubborn).  Instead, make simple comments about things and then pause.  Your child just may surprise you and say something back.  Listen to what your child is trying to say and do your best to interpret his/her intent, so that you can make a comment back.  For example, if your child points to a dog and says, “dah”, you can say, “Yes, I see the dog.  Do you want to pet the dog?”  Letting a child know that his/her best is good enough will propel your child to feel successful and to try more and more.

Try to provide opportunities for your child to need to communicate.  Put a desired toy up on a shelf (or a clear jar with a tight lid) so that your child will need to communicate with you to get it.  Even a tug on your shirt and a point toward the toy is communication.  Use the opportunity to model the word (e.g., “Oh, you want the bear.  Buh.  Bear.” ) Then just wait with a smile to see if your child will try saying the word.  If not, that’s OK.  Just say, “Buh.  Bear.  Here’s your bear.”   Take a jar of bubbles with the child’s anticipation that you will blow them.  Hold the wand and say, “Bubbles? Buh.”  Then just wait (again with a smile).  If your child makes any sound, say, “Bubble!” and then blow them.  If your child doesn’t say anything, just repeat the word and then blow the bubbles.  Gradually, your child will understand that using “words” is very powerful!

Model some “routines” for your child.  For example, when pretending to feed a teddy bear, say “Eat, eat, eat.”   “Mmmmmm.”  Then when putting the bear to bed, say, “Night, night bear.”  “Shhhhh.”  Remember to pause and provide your child with silent time to see if he/she will try the same.   If we do all of the talking, the child doesn’t have the opportunity to do so.  Plus, the child’s motor system may need that extra time to be able to speak.

Providing a simplification of words is a great technique, as long as you include the true word in your model (e.g., “Buh.  Bubbles.  Buh.”)  While a child may not be able (or thinks he/she is not able) to say the full word, a sound or syllable may be simple enough to give your child confidence to try.

Relax and have fun!!  You will see that, with the right support, your child will get there!!  Oh, and beware….they do make up for lost talking time later!!