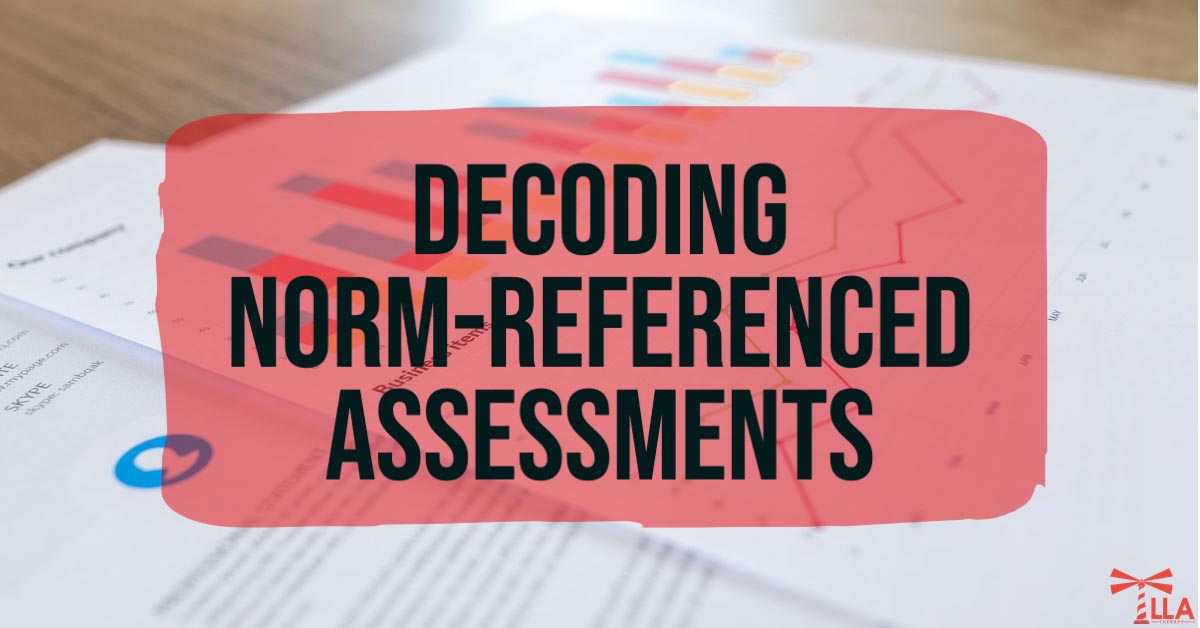 What is a norm-referenced test?

A norm-referenced test is a type of standardized assessment, meaning that all test items are required to be answered and scored in the same manner.  Norm-referenced tests compare a child’s performance to a normative sample. What is a “normative sample”? During test design, the test creators administer the assessment to a large group of children (usually hundreds to thousands) from varying regions, socioeconomic backgrounds, races, and disability statuses that are intended to represent the general population of children for whom the test is intended. Each test taker’s performance is then ranked according to age group and/or sometimes gender along the bell curve, pictured below. Individuals who fall in the middle of the curve are considered to be typical or “average” for that peer group. Children who fall to the right of center would be considered to be above average, while children who obtained scores that place them to the left are considered below average compared to peers. When your child takes a norm-referenced test, their score is compared to the normative sample to determine where they fit in amongst their peers on the curve, which helps us see if their abilities are typical for their age group.

Terms you may see on an evaluation report and what they mean:

When a child completes a norm-referenced test, the clinician takes their raw score (the number of test items they answered correctly) and converts it into a standard score, which corresponds to the bell curve. Standard scores between 85 and 115 are considered to fall in the average range. If a child obtains a standard score less than 85, this is considered below average and may indicate skill deficits or impairment compared to others their age.

Although norm-referenced tests are an important tool for helping clinicians diagnose disorders, they are not perfect. Some norm-referenced assessments have design flaws that affect how accurate they are or whether they actually test the skills we are interested in. In addition, normative samples don’t always reflect the background of the child being evaluated, creating “unequal” comparison. There are also factors individual to the child that may come into play. Although a norm-referenced test may be appropriate for a child based on their age, the child’s true abilities may not be captured by a norm-referenced test if they have trouble engaging in structured tasks or have physical and/or cognitive barriers that would make it difficult to complete the test. Because of these limitations, clinicians rely on other assessment tools, such as observations, parent and/or teacher input, and schoolwork samples. This way we can ensure we have a complete picture of a child and can develop an intervention plan that will meet their specific needs.